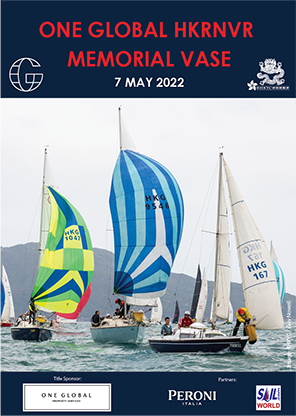 ONE GLOBAL HKRNVR MEMORIAL VASE
7 May 2022

The HKRNVR (Hong Kong Royal Naval Volunteer Reserves) Memorial Vase is a pursuit race, which is different to normal yacht racing in that competitors are given staggered start times under RHKATI handicap, ie. the slowest boats start first and then the faster boats set off in pursuit, with the time delay between classes of boats being determined from their handicaps. If all boats are sailed equally well, they should (in theory) all finish at the same time.

There are three Harbour pursuit races held each year, namely the Lipton Trophy, the HKRNVR Memorial Vase and the Tomes Cup. These three events, together with the annual Around the Island Race held in November, create a series known as the “Top Dog Trophy Series” with the “Top Dog” crowned at the end of the season.

HISTORY OF THE HKRNVR MEMORIAL VASE

In 1950, the HKRNVR Memorial Vase was presented to the Club in honour of the members of the Hong Kong Royal Naval Volunteer Reserves who died during the Battle for Hong Kong.

The presentation of the then 116 year old Georgian silver vase with dolphin handles, which was purchased out of the HKRNVR pre-war mess funds, was handed to Royal Hong Kong Yacht Club Commodore, N.V.A. Croucher by Lieutenant Commander J.C.M Grenham RNVR (Ret.) for a competition to perpetuate the memory of HKRNVR members who gave their lives during World War II with the request that an effort be made each year to set a course which represents an early wartime Naval Patrol.

“As most of you know, the inaugural meeting for the formation of the HKRNVR was held in the old Yacht Club. The Chairman was Andrew Lusk Shields, Commodore RHKYC, and later Hon Commander HKRNVR. The Vice-Commodore was H. S. Rouse – the first CO of the HKRNVR. Form the meeting, held in early 1933, emerged the HKNVF and HKRNVR.

A close liaison was maintained with the Yacht Club – all officers were members and almost all the boat boys formed the nucleus of the seamen personnel. RNSA Dinghy races were held every Wednesday from the Cornflower.

On your Roll of Honour the names of Peter Dulley, Donald Wagstaff, John Gifford Hull, John Colls, and H. Stopani Thompson appear whom you all knew personally as keen yachtsmen.

I now have pleasure in handing to you as Commodore Royal Hong Kong Yacht Club, the HKRNVR Memorial Vase. It must have a nautical history by reason of its dolphin design. It was made by T. Hemming in the reign of William IV 1834.

We of the HKRNVR wish it to be sailed for annually, the course, if possible, to embraces our Loop Patrols, details of which will be given to your sailing committee.”

Early Bird Entry Fee (by 1800hrs on Sunday 9 January 2022): $250
Standard Entry Fee: $300
Please include all your crew (including skipper) and their emergency contacts when entering / signing on.